When you try to research Stuart Isaac and how he turned up missing you get the usual crap from strangeoutdoors.com. Reading their site, everything is either “Shocking”, “Strange” or “Disturbing” words to simply get you to click on the article and half of the information on the site is bollocks. There is nothing shocking about Stuart Isaac’s disappearance. In fact, it’s pretty normal. All you have to do is read our database to quickly realise that people’s vehicles turn up without the owners all the time. Here’s just a few;

Moving on to Stuart, he was a 48-year-old pacific islander from Burtonsville, Maryland. On 6th September 2006, he left a note for his family stating he was going on a cross-country trip. The family found this strange because Stuart wasn’t usually an outdoor person. Stuart was a big man at 5’8 – 5’10, 215 – 230 pounds. He didn’t have any experience of hiking or camping and it’s thought he had no equipment with him.

The next confirmed activity was 24th September 2010 at 3.30 am when Stuart called his friend from High School. Matsue Evans lives in Guam and the call was unexpected. Stuart and Matsue talked on the phone for two hours. Because of the time difference, they usually communicated over text and email. During the call, Matsue does not report anything strange. Matsue stated, “He said he was en route to Yellowstone”. That means for the period of 7th September to the 24th September. No one actually knows what Stuart was doing or where he was at. But some reports state Stuart arrived at Yellowstone 32 hours after he left his home. However, there is no evidence to suggest this is the case. No witnesses, no booked hotels, no booked anything.

On the 26th of September 2010, a routine patrol found Stuart Isaac’s vehicle. A 2009 BELLEKLexus IS-250 in black with tag BELLEK abandoned by Craig Pass. Stuart Isaac was then reported missing. Craig Pass is on the continental divide at an elevation of 2,518 m. There are no trails in the area so officers knew there was something wrong. The vehicle was unlocked and the keys were still inside. There are no reports as to what else was inside the vehicle but I have included the newspaper articles at the bottom of the page.

Officials would search the area for Stuart but no trace of him has ever been found. We know he was still alive on the 24th of September and his vehicle was found on the 26th. I wonder if the Police ever investigated whether he had a gun or purchased a gun in the weeks and days leading up to when his vehicle was found? It sounds like, after the phone call, Stuart drove to Craig Pass and committed suicide. It’s also not uncommon for someone to receive a random call from the person who is about to go missing. 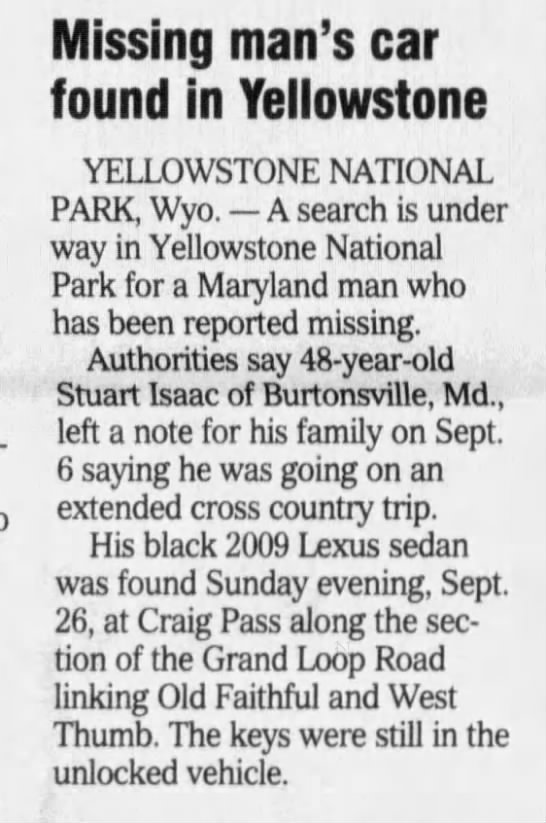