On 8th July of 1996, a family of four from Germany was visiting Death Valley National Park. The family consisted of Egbert Rimkus, his 11-year-old son Georg Weber, Rimkus’s 27-year-old girlfriend Cornelia Meyer and her 4-year-old son Max Meyer. The family was on holiday from Dresden, Germany. They arrived in the United States on 8th July 1996 flying from Germany to Seattle–Tacoma International Airport. Once there they flew to LAX and rented a green 1996 Plymouth Voyager.

At some point, it looks like the family was running short of cash so they called home and asked for $1500 to be wired to them. This was somewhere between the 8th July 1996 and the 22cd July 1996. At this point, they were staying at the  Treasure Island Hotel and Casino in Paradise, Nevada. On the 22cd of July 1996, the family drove into Death Valley National Park where there is confirmed reports that they purchased two copies of the “Death Valley National Monument Museum Text” (in German) at the Furnace Creek Visitors Center.

They spent their first-night camping at Hanaupah Canyon near Telescope Peak and the next day on the 23rd they travelled to various tourist sites, signing visitor books as they visited each place. Cornelia included in one visitor book at an abandoned mine that they would be “heading over the pass” At the time, this was thought to mean Mengel Pass. At some point, it is assumed they travelled down West Side road and made a turning onto Warm Springs Road which goes to Warm Spring Canyon. This isn’t even a road really it’s a track. Eventually, they would navigate this road and end up in Bute Valley.

This is where things appear to have gone very wrong for this German family. They were due to fly back to Germany on 27 July 1996. When they didn’t arrive home, Rimkus’s ex-wife Heike Weber started sounding the alarm. Meanwhile, the rental company had reported the van the family had rented as stolen because it was over 30 days overdue. A park ranger found the van at coordinates 35.9272°N 117.0249°W on 21 October 1996 whilst conducting a routine surveillance patrol from a helicopter. He was looking for illegal drug manufacturing sites. (Drugs are for mugs people) The plates were run and checks made and this is when it was noticed the family was missing.

Inspection of the van revealed three of the four tires were flat, the wheels had been damaged by driving over rocky terrain, and the vehicle had been driven on them for over two miles. Inside the van was  A Coleman sleeping bag, tent, numerous toys and an unused tire jack. No trace of the family was found in or around the van. At the time, over 200 search and rescue workers performed a search of the area the search cost around $80,000 and included over 45 searchers at all most times. The groups involved in the search for the missing family were the China Lake Mountain Rescue Group and the Indian Wells Valley Search and Rescue Group. The search failed to turn up any clues to the whereabouts of the family but a single beer bottle was discovered under a bush over 1 mile (1.6 km) away from the stranded vehicle. This was at coordinates 35.9289°N 116.9980°W. After 5 days on 26th October 1996, the search was called off.

Fast forward to 12 November 2009 and two hikers who were out searching for the remains of the family found them at coordinates 35.8674,-116.9747. Two adult remains were found and DNA revealed the remains belonged to one of the adults from the family. Nearby was Cornelia’s passport and bank ID, a journal with German writing and a wine bottle. I find the fact that a wine bottle was found nearby interesting. Assuming they succumb to the elements, it’s as hot a hell out there in July. They were likely drinking the wine because that’s all they had but actually, that’s probably the worst thing you can do. Alcohol makes you more dehydrated. The Children were never identified by the soles of children’s shoes were found nearby.

Was this just a terrible accident? Some sites claim the van just appeared in its final place out of thin air, come on people! don’t be dumb. Vans do not fly. I have included pictures of the van when It was found, Cornelia’s purse and ID,a journal with German writing and the place where the remains were found. Below I plot the locations of the van, wine bottle and remains. 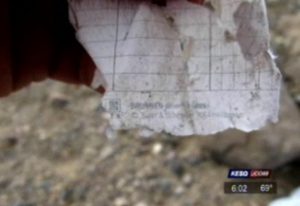 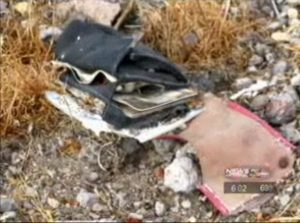 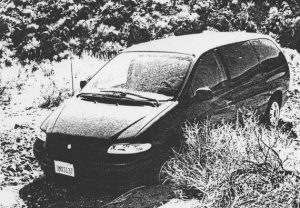 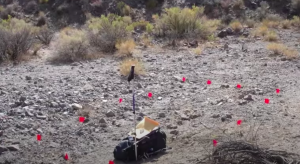