Bobby Panknin Vanished whilst on holiday with his family at the now-closed Deep Lake resort, northern Stevens County. They were camping and had arrived at the area on the 1st August 1963. Bobby was with his parents. Mother Edna, father Howard. He had three older brothers. In the image below from left to right Ted, Bobby, Jim and Bill. Sadly, shortly after the picture was taken, Boddy Panknin would vanish from a logging road to the west of Deep Lake.

On August the 3rd 1963, the family hiked into Canada through Trail and Rossland to Castlegar and back to the Deep Lake resort. But on their return to the camp, Howard decided to go fishing and his eldest son Ted went with him. So the remaining family members decided to go for a short hike. Edna, Bobby, Bill and Jim hiked west along the Deep Lake on a logging road. Sometime between 12 PM and 3 PM (Not exact), Bil heard a waterfall that sounded like the Laughtin Brook in the Thornton Burgess children’s stories. The family read these all of the time.

Edna followed Bill but told Jim to wait with Bobby on the logging road. Jim didn’t listen, a mistake he would regret for the rest of his life. So Jim followed his mother and brother about 150 yards away from the road towards the waterfall (point of separation). I have included images of where I think this was below.

But when they returned, no more than 5 minutes later, Bobby Pankin had vanished. Bobby was wearing only some blue swim trucks. He had no shoes or any other clothes. There were no tracks indicating where he had gone. By 3.30 PM on Saturday 3rd August 1963 campers and local residents are out looking for Bobby and within a few hours the Stevens County Sheriff is called and an organized search starts before dusk. On Saturday and Sunday, bloodhounds are brought in. They sniffed Bobby’s shoes and follow his scent for several miles. They do this twice with different dogs but they lose the scent in the same place. By this time, 500 people are out on the hunt for Bobby.

On Friday, August the 9th the search is widened to include Deep Creek and riders on horseback are added to search bear country. On August 10th and 11th, the search was restarted. Going over areas already searched. Plans are also drawn up to distribute fliers, nets of wages are searched and hunters look for signs an animal like a bear took Bobby. Nothing is found. At the close of play on Sunday the 11th of August 1963 the Sheriff, Albert “Dutch” Holter calls off the search for Bobby. Holter would continue to keep a picture of Boddy behind some glass on his desk until the day he retired.

I would love to know where the hounds tracked his scent. I have been unable to find any information on which logging road this happened or where the scent was found. Where there is a point of separation there almost always seems to be no tracks or any evidence at all. It’s like they fell through a hole. I do not subscribe to the idea that this boy was taken by a mountain lion. He would have screamed, there would be blood. Some cases that are similar are; 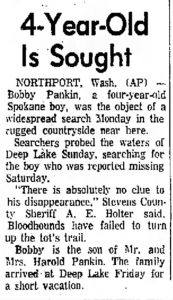 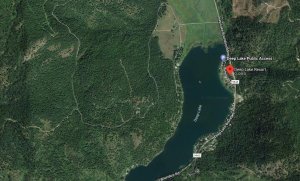