ID: 175
Crater Lake
Add to wishlist
Share this
Sammy Boehlke was 8 years old when he literally vanished from near Cleetwood cove, Crater Lake on 14th October 2006. His father had rented a cabin near Diamon lake and they were visiting the area around Crater lake.

Sammy was reportedly diagnosed with Asperger’s Syndrome. A form of autism. Because of his condition, he didn’t like bright lights or loud noises. A common denominator in people with autism is they are extremely intelligent. They exceed in the activities they like to do and put little to no effort into activities they dislike doing. Was Sammy a genius? If he was that would link his case to many other intelligent people who have gone missing.

On 14th October 2006, Sammy’s dad pulled into a pull in above Crater lake, a few hundred yards away from a car park. The pull-in had a steep bank to the left and the lake on the right. Above the bank is a dense forest.

Sammy run away from his father, up the bank towards the forest. His father ran after him but he was at least 50 yards behind him and couldn’t catch up. Sammy went over the top of the incline and disappeared from view. In the seconds it took his father to reach the top of the bank Sammy has vanished and was never seen again. WEIRD. 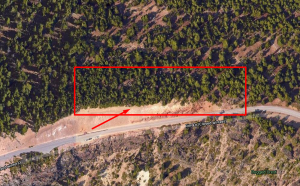 On the above map, you can see the steep bank which Sammy run-up. There is nowhere for him to go. No drops, no holes, no streams, no rivers just trees. Yes, you wouldn’t be able to see him once he hit the tree line but he’s not going to go far on his own.

His father reported him missing shortly after 4 PM on the 14th and an immediate search was put together. Over 200 persons searched 4000 acres over the course of a week. Dogs were used to try to find his scent and helicopters with FLIR (Forward looking infrared) combed the ground below. At the time of Sammy Boehlke’s disappearance, the weather conditions were cold and snowy.

The search included both sides of the road from where Sammy vanished. The slop to the lake was 700 to 1000 feet but Sammy disappeared on the other side. It’s unlikely he came back down the bank, crossed the road and went towards the lake.

When Sammy Boehlke went missing from Crater Lake, reports state he was last seen wearing a long-sleeve black and green striped shirt, cargo pants, red suede shoes, and a blue winter coat. Sammy went missing in 2006, 15 years ago at the time of writing this article. Nothing has ever been found. If he was wearing red suede shoes then where are these? Even in the hard weather, these would survive for a hundred years.

People shouldn’t just vanish but they do for some reason. Sammy’s case meets a lot of the profile points of the Missing411 profile developed by Dave Paulides. There is a point of separation. He just vanished. There is water nearby. There was bad weather at the time and dogs couldn’t track him. Was Sammy abducted by someone or something in the surrounding area? Let us know your thoughts in the comments below.