This case is one of the cases that blows my mind. When someone vanishes right in front of someone else and nothing is left behind I find it hard to reconcile what happened. I’m a methodical person. In my mind, everything has a stage and everything flows in one direction creating a storyboard in my mind. In cases where someone vanishes their storyboard abruptly stops and never starts again. People shouldn’t just vanish, but it does happen.

David Paulides first got me interested in this phenomenon and, for the record, I think this man is entirely credible. I’m going to write a blog post on his mannerisms and body language and how I came to that conclusion but that’s not for here. I researched this case and found a few variants. As I have pointed out in other posts many websites like to stretch the truth and add little bits of information that make things sound more dramatic. We’re just interested in facts here.

It was July 17th 1981 and Stacy Ann Arras was 14. Stacy Ann Arras was in Yosemite with her father, George and six others. They booked an excursion on horseback to the High Sierra camps. In total, there were 10 people (including the guides). The trip was booked via a contractor for the National Park Service. I think they made their way into Yosemite from Tuolumne, along the John Muir Trail because Paulides states they stopped at Cathedral lakes for lunch. After lunch, they made their way to Sunrise High Sierra Camps. Sunrise High Sierra Camp sits 9.400 feet above sea level and the group had planned to stay the night before heading out along the High Sierra Camp Loop. The camp holds 34 people in nine cabins. On the map, I have marked the camp with the red box. 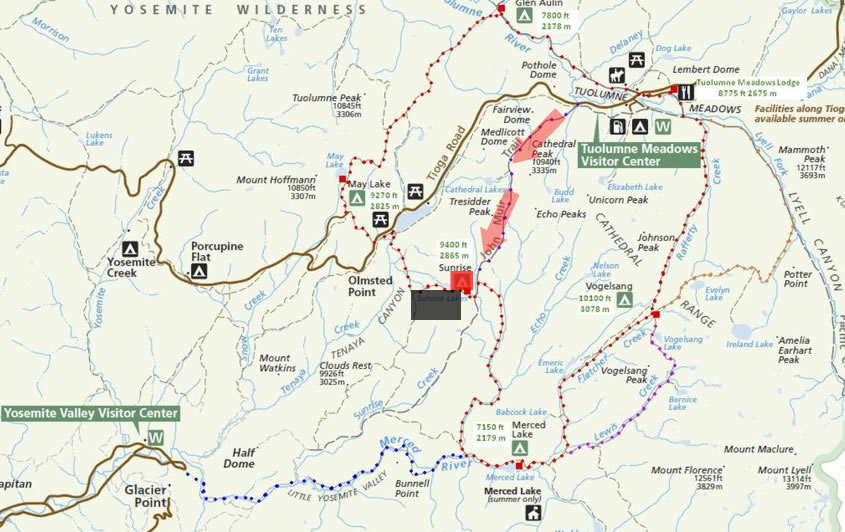 At the camp, Stacy and her father shared a cabin. She had a shower, got changed and put on some sandals and told her dad she was going to walk down the trail with a man called Gerald Stuard. Gerald was 71 years old. Stacy wanted to take some pictures with her camera. Her dad stopped her and said she needed to change her shoes. Sandles were not appropriate for the area. Stacy put on her hiking boots. I don’t know how well Stacy and her dad knew Gerald but the fact her father was allowing her to go off with an older man suggests they knew him quite well.

Stacy and Gerald headed out a short distance. Gerald told Stacy he needed to sit down. They stopped just above Sunrise Lakes as marking in BLACK on the map above. It wasn’t far from the camp at all. One of the tour guides who were with the group saw Gerald sit down on the boulder and Stacy walk away. Gerald and the guide would be the last people to ever see Stacy Arras.

Stacy walked down a granite hill site towards a tree line that surrounded the lake. In the map below, I have marked the route which I think they took. It’s under a mile as the crow flies from camp to Sunrise Lake 3 and is the closest lake in the area. It was stated Gerald needed to sit down and there is an incline walking towards Sunrise Lake 3. He was 71 so he may well have needed a break after the hike up. 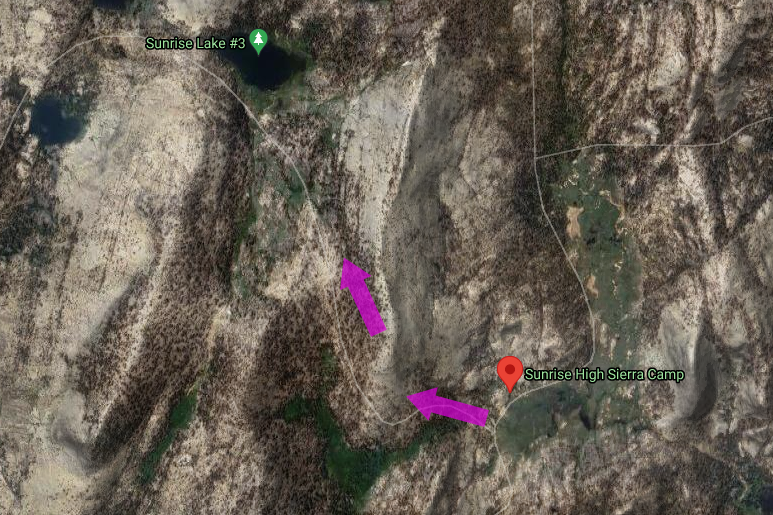 She told Gerald that she was going down towards the lake and would be back in a few minutes. She proceeded down to the lake and never returned. Searches would later follow the trail down to the lake and find her camera lens on the trail. The national Park service came in right away and started searching. A 9-day formal search, hundreds of people and helicopters. No one ever found anything to do with Stacy. Nothing of hers was ever found. Stacy Ann Arras literally vanished from Yosemite on 17th July 1981.

Weird or what! Someone disappears out of sight and is never seen again. Gerald has a witness. Apparently, the guide saw him sit down and Stacy carry on. What the information doesn’t tell us is how long Gerald sat down. Did he move after the guide was out of sight? Based on the above facts I don’t think Gerald harmed Stacy. If he needed to sit down after walking up there he is not going to be able to kill Stacy and hide her body. Stacy was big for her age and Gerald was aged 71. Sure, he could have killed her but then where did he put her body. He wouldn’t have had time to move it far and the search was extensive. Another theory could be that the guide and Gerald worked together to kill and hide Stacy. Yerr, that’s pretty far out there but it can’t be discounted. Either way, Stacy vanished off the face of the earth and was never found. The Park Service refused to release the case files which amounted to over 2000 pages. They did eventually release some files which contained some images of the search and of Stacy. All of which was already available. So where are the 2000 pages and why were there so many pages? Clearly, they investigated something and don’t want to release what. What do you think happened to Stacy? Where did she go? Let’s see what you can come up with in the comments section below.