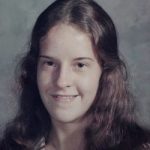 Trenny Gibson vanished whilst on a school trip with 40 students

Jeez Louise, there is so much bollocks out there relating to this case. Loads of websites like those idiots over at strange outdoors claim items like cigarette butts were found. Some state dogs could track Trenny’s scent to a road and it’s ALL bollocks. We challenge anyone to provide any evidence that this is the case. We searched newspapers for the ten years after Trenny Gibson vanished in Alabama, Georgia, Kentucky, North Carolina, Tennessee, Virginia and Mississippi. There is no evidence to suggest any items were found or any scents were tracked. Had this been the case this information would definitely be in the press. That would be huge news that the searchers would have made public. As always, we only deal with facts and publish details that we can back up so here goes. 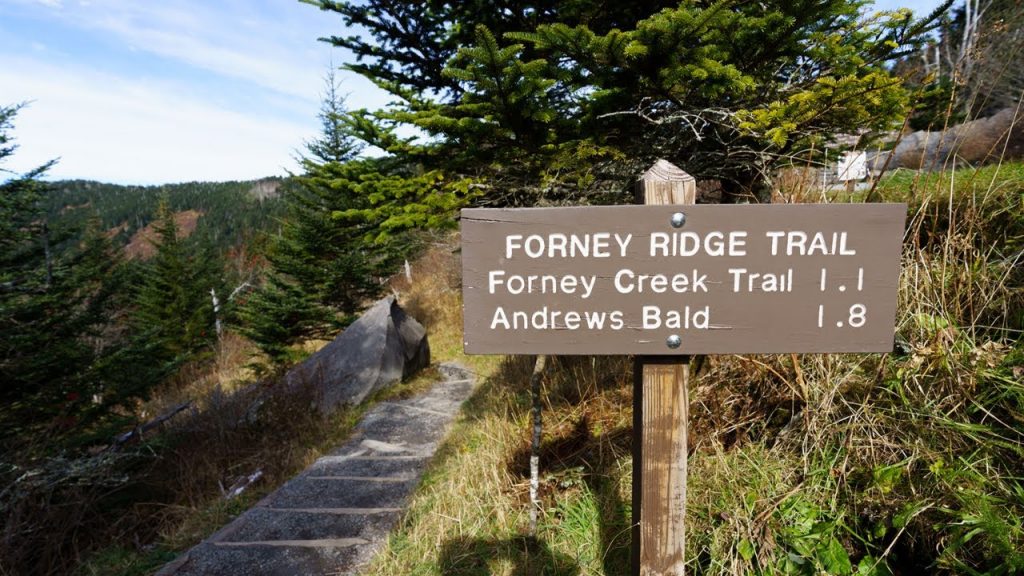 Trenny Gibson was on a school horticulture trip with around 40 classmates from her school, Bearden High School on Friday, October 8th 1976. The bus parked in the Forney Ridge parking lot near Clingmans Dome. The students would hike 1.8 miles along the Forney Ridge Trail to Andrews Bald mountain. At the start of the hike, the students separated into groups and Trenny walked the trail alongside Robert Simpson. Robert was a friend of Trenny’s brother. On arrival at Andrews Bald, around 1:30 PM the students ate lunch.

Trenny was cold so she borrowed Roberts’s coat. The students were told to be back on the bus at around 3.30 PM. But on the way back to the bus, Trenny walked with some classmates for a while but they stopped to rest (point of separation). About 3/4 of the way back she would be on her own. So, in front of her were students and behind her were students.

Students stated they saw Trenny walking down a path near the Dome area, covered with thick brush. Trenny would fall out of sight of the students behind her and once the students were back at the bus, Trenny was noticed as missing. There were two teachers on the trip. One, Wayne Dunlap, would hike back along the trail with a student but when Trenny could not be found they used a CB radio to report her as missing. This was around 4 – 4.30 PM

Trenny was wearing blue jeans, a brown wool jacket, a blue blouse, a blue and white sweater and tennis shoes. Initially, a teacher, Wayne Dunlap would stay behind after sending the bus back to the school to help with the search. Around 20 people combed the trail that night which lasted until the early hours of the morning before being suspended due to bad weather.  The next day, Saturday the search was scaled up and around 200 people were out searching. Still no Trenny.

“The hardest part is waiting. Waiting without knowing where my daughter is”

The FBI would question all of the students on the bus but they could never produce any leads. Three months later in January of 1977. The Knoxville Sentinal would publish an article about the case. In the article, her father states that he was very unhappy with the search. It took almost 5 hours for the school to report Trenny missing to her parents and he feels the search was not conducted properly. He would complain to the FBI and receive a letter back saying they were “still on the case”. In April of 1977, the search would start again after the winter snow had melted. Again, nothing was produced from this search.

Iin September of 1977, the parents of Trenny, living at 1427 White Tower Drive would file a lawsuit for negligence with a value of $350,000. The defendants named in the suit were the city of Knoxville, Knoxville Board of Education, James Newman: Superintendant of schools, Principle Frank Hall and former teacher Wayne Dunlap. Interesting! Wayne Dunlap had left his job in the time after this incident. But I couldn’t find any information as to what happened in the suit. If any money was ever paid out. Nothing. If you have any more information about this, claim the listing or get in touch in the comments.

To this day, Trenny has not been found. None of the items of clothes she was wearing has ever been found. What I find strange here is, if someone had abducted Trenny, it would have been a tough time trying to get her to go quietly. She does not appear to be a small person and no one is going to carry a conscious 16-year old through thick brush. It just doesn’t happen. So where has she gone? If she’s still in the Smokies, she is still there, somewhere. 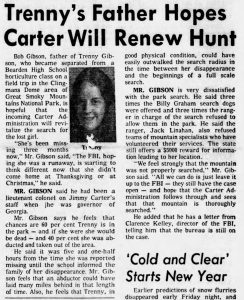 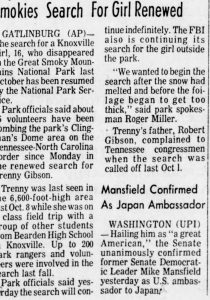 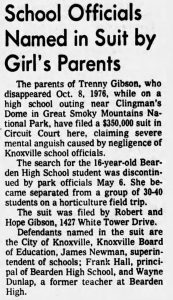 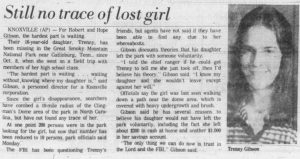 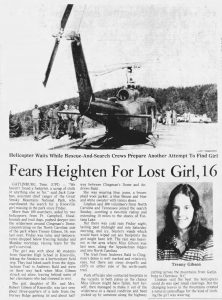 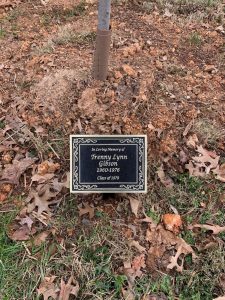