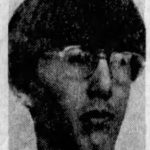 Steve Martin vanished whilst out running. His body would be found a year later

Steve Martin vanished and was found almost a year later

Steve Martin, a 15-year-old high school pupil was on a week-long trip with his school. He was an avid runner and his team coach had brought 18 of the Cross Country team to Petit Lake to strengthen their lungs and legs. It looks like they were camping at the Petit Lake campground. The dates are confusing in this case. One article states it was Sunday when Steve Martin vanished. In another, it states he left camp Saturday afternoon. Let’s go with the 16th.

Steve left the camp at Petit Lake in the afternoon of Saturday 16th August 1975. It’s not known if Steve was seen at the camp on the evening of the 16th but he was reported as missing on the 17th August. Therefore the last confirmed day he was alive was the 16th August 1975. Steve’s family and friends thought it was strange that Steve had left the campsite for a run on his own. His parents would state he didn’t like to do this.

Almost straight away people started looking for Steve. The search initially revolved around a mile radius from the campsite and utilized around 30 police, search and rescue and a helicopter which failed to locate any trace of Steve Martin. Within a few days, the search area was expanded and soon 100 searchers were out looking for the runner. His mum would state he was not a runaway speculated someone had abducted her son. The search continued for a week until all hope had been lost. When last seen, Steve was only wearing shorts, a teeshirt and running shoes.

After five weeks the search had still not produced any new leads or evidence. Searches have searched and double searched the whole area and had even consulted physics who thought Steve would be found by a fork in a river. Another said he would be found in a Newport hotel. (These people are idiots)  Dogs couldn’t pick up any scent to track and helicopters were useless because of the thick bush.

Almost a year later on 16th July 1976, forest workers report finding clothing and skeletal remains in Sema meadows. This area is about 4 miles away from the Petit Lake Campground. They are found about 300 yards from the nearest trail in thick brush. The workers had to mark where the remains were or they feared they would never find them again. The remains were confirmed by dental records as being of Steve Martin. Found by the remains were a set of glasses.

The Sherrif reports that there were no signs of foul play but of course, there wouldn’t be because half of Steve was missing due to the length of time he was out there. He was found in an area that had been searched multiple times. Yes, it was thick with brush but how did searchers, and dogs miss him. He had been in the area in the previous days running. It’s assumed he ran up the road from the camp. It looks like he then went into Sema Meadows on a return Journey. So what happened to him when he entered this area? It’s not far from a road, how could he be lost?

I don’t know the exact location he was found. If you can help get in touch or claim this listing. I don’t think he just lay down and died. He was either taken off the road and placed where he was found or something happened to him when he entered Sema Meadows. What do you think? 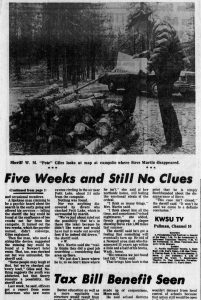