Jeffrey’s case is one of those cases that doesn’t have much information. I searched the newspapers for the years around 1974. I could only find one article with a few lines in it about Jeffrey. So if you can help fill out the details in this article or any article on the vanished.us website click the claim button on the listing. Jeffrey Michael Bratcher lived with his mother Gayle Bratcher in Mesquite, Texas. His parents were divorced and his mother had full custody of Jeffrey.

On the 15th of June 1974, Jeffrey and his siblings had been brought up to Ocean Shores, Washington visiting his father and stepmother. They were camping and the Children and Adults had their own areas.   As this time approached, Jeffrey told the other children he was going to take another trail back to the adult’s area and they separated (point of separation).

Jeffrey was reported missing and a search started immediately. They suspect his scent was found and it tracked a path that lead out of the park to the pavement. There are no reports of any other searches apart from with dogs which suggest the police didn’t think it was worth combing the park for Jeffrey. 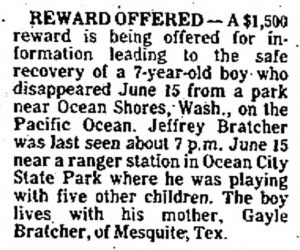