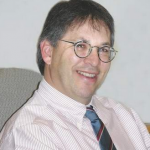 Gilbert Mark Gilman, a 47-year-old who was Director for the state department of Retirement systems went missing from Staircase Olympic National Park on 24th June 2006. Gilbert was last seen at the Ranger Station where he had parked his Silver 2005 Thunderbird car after deciding to go for a short hike. Gilbert was carrying a camera but no backpack and was wearing a bright blue and green Hawaiian shirt, khaki pants, sandals and had a pair of prescription sunglasses. A day later a coworker would report Gilbert as missing after he failed to turn up to a meeting. A day later Rangers would notice his vehicle was still parked in the car park and join the dots. The hunt for Gilbert started. 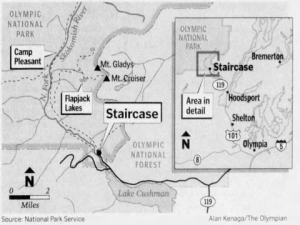 Who was Gilbert Mark Gilman

Gilbert had a distinguished career. Before becoming Director of the State Department of Retirement Systems in April 2005. He was a Democratic Operative in Evanston but Gilbert didn’t care much for politics. Going back further he was a Military Intelligence specialist and spoke 4 languages. He also worked in China on behalf of the United Nations to set up a media network during the Gulf war in 1991.

Gilbert even worked in Iraq under a special Military program looking for Weapons of mass destruction (which we now know didn’t exist) and it appears Gilbert found this out and left after his operations centre was the target of a suicide bomber. (nuts them people are).

The official search started at noon on Tuesday 27th June 2006. This means Gilbert had already been missing for a few days. He was last seen on the 24th. That’s a long time to be outside in shorts and a tee at night. Initially, the search utilized rangers dog and later helicopters and focused on a 2.5-mile wide area. This included the two rangers staying overnight at Wagon Wheel lake. Towards the end of the search Firefighters from Lake Crush Fire Department and two dog teams from Grays Harbor also got involved. Nothing was found. Not a single clue. Where’s that camera he was carrying. It’s still out there somewhere. 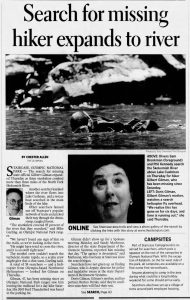 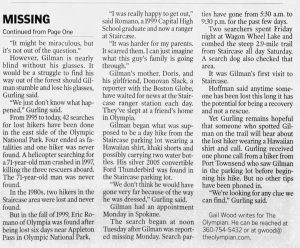 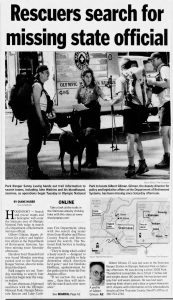 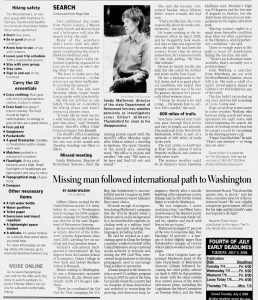