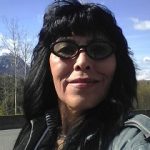 Frances Brown vanished picking Mushrooms in a remote area west of Highway 16 between Smithers and Hazelton in British Columbia. She became separated from her companion and was never seen again. Frances was 53 years old and had some experience of being in the wilderness.

Frances was carrying rain and hiking gear as well as a lighter. Her companion reported her as missing on the 14th of October 2017. A massive search was launched for Frances comprising of ground and three air teams. At the time, the RCMP stated they had found some clues but did not elaborate on this.

The search was slowed down by snow and rain but RCMP stated there were dry places in the forest and it was possible for someone to “hunker” down and keep dry. Evidence of a campfire was discovered early on in the search. But, after eight days, the official search for Frances Brown was scaled back. A private search did continue but nothing else was found.

What happened to Frances? Why did she Vanish? Why has she not been found?

**Sighs**. Just look at the picture of Frances. When I look at her picture the first things that pop into my mind is caring and compassion. She has a wonderful, caring face the family must be absolutely distraught. Imagine your own mother, wife or sister leaving the house and never returning. That’s bad enough but add in the fact there is absolutely no closure for the family. I can’t even begin to imagine it. In this case, there is a point of separation so I’m marking this as a featured case. Featured cases are outlined in red and all of these cases include people who were there one minute and gone the next, there is a word for that. Vanished.

Details of where Frances Brown was when she vanished are not available so I can’t plot her route on a map. How does a lovely lady just vanish whilst picking shrooms? It shouldn’t be possible but here we are again.